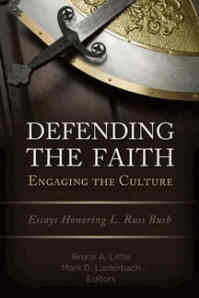 L. Russ Bush (1944-2008) was a leading Southern Baptist philosopher, apologist, and professor whose landmark book Baptists and the Bible helped fuel his denominationâ€™s conservative resurgence and decisive emphasis on the inerrancy of Scripture. In Defending the Faith, Engaging the Culture, his colleagues pay tribute by writing about the topics that inspired Bush and excerpting from his published and previously unpublished works to support their message. Themes include Christianity and the Bible (with essays by Tom Nettles and Daniel L. Akin), Christian Apologetics (Gary Habermas, Norman Geisler), Christianity and Science, as well as Faith and Culture. Editor Bruce A. Little, director of the L. Russ Bush Center for Faith and Culture at Southeastern Baptist Theological Seminary, gives an inspiring testimony to the ongoing legacy of Dr. Bush in the book's afterword.

CD - Never Be Shaken - out of stock