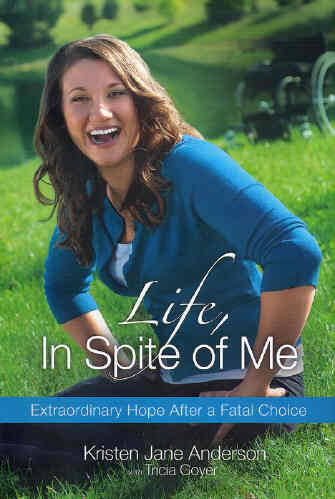 Kristen Anderson thought she had the picture-perfect life until strokes of gray dimmed her outlook: three friends and her grandmother died within two years. Still reeling from these losses, she was raped by a friend she thought she could trust. She soon spiraled into a seemingly bottomless depression. One January night, the seventeen-year-old decided she no longer wanted to deal with the emotional pain that smothered her. She lay down on a set of cold railroad tracks and waited for a freight train to send her to heaven and peace.

But Kristen's story doesnt end there. In Life, In Spite of Me this remarkably joyful young woman shares the miracle of her survival, the agonizing aftermath of her failed suicide attempt, and the hope that has completely transformed her life, giving her a powerful purpose for living. Her gripping story of finding joy against all odds provides a vivid and unforgettable reminder that life is a gift to be treasured.

Includes notes of encouragement Kristen wishes she had received when she was struggling most.